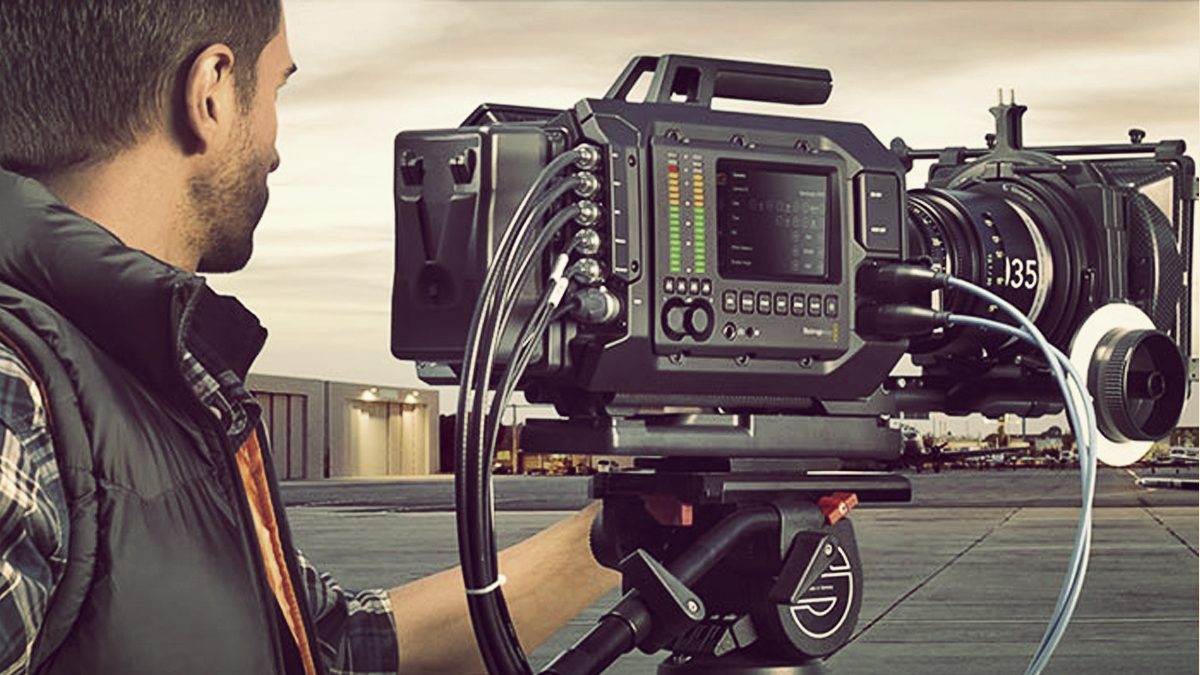 First off I want to mention I am not a gear review guy-as in I don’t write gear reviews, just to write them in order to blog. The review I am writing on the Blackmagic URSA is from a standpoint of considering the camera for work on commercial and feature film use. With that said…here it goes!
I have had my eye on URSA since it was announced, more so recently due to a shoot I was media managing a while back. We shot some scenes with a drone flying a Blackmagic Design 4k. The rest of the shoot was RED Epics, and I couldn’t get over how well in comparison the footage looked. I still don’t believe it’s as good as Epic footage, but it was really close though. Especially for a $3000 camera! So today I went to a Blackmagic Design dealer who had just received the URSA.
My first impression was that it looked like a real camera. It has real professional features, such as it comes with a handle, it’s not shaped like a DSLR, it has mounting options along the handle, and it also has built in mounting options for rods. The camera sat on a table as I went through the menus, examined the rather large monitor-I can live with that if I have too. I started to examine the smaller touch monitors, they weren’t too bad. It seemed like a really good idea for a one man band, or maybe a documentary crew as you can fold in the monitor and pick up the camera and go and you don’t have to worry about the noga arms coming un-tightened and monitors flopping around. The audio on the camera is up to standards with what would be needed for post sound, at least on a documentary standpoint. So I was thinking this is pretty neat. Even if you can only choose 4-5 different frame rates, it’s not a bad deal for $6k. Although you would expect that it wouldn’t be too hard to choose frame rates between 1fps and the max rate of 60fps, not sure why you can’t still…
MY FIRST IMPRESSION WAS THAT IT LOOKED LIKE A REAL CAMERA. IT HAS REAL PROFESSIONAL FEATURES
So then I went to pick up the camera. It really is heavy. I don’t think most of the time the camera packages I have ever had on my shoulder weighed this much total. Please take into consideration I shoot indie films with smaller primes like Zeiss MKIIIs etc and I always try to keep a lightweight mattebox and one sided follow focus. But I can not imagine having this camera on my shoulder for a near 3 total hours of shooting time over a period of a day, much less for several days or weeks. Forget about considering any large zooms on your shoulder or handheld. I’m still trying to figure out how a one man band could take advantage of it considering the weight. Remember the picture on the Blackmagic website that has the camera on a tripod above everyone’s heads and the big monitor tilted down? How did he get the camera that high? Especially while being safe with all the people around?! I know, I know…not real, but still. This is advertised as great for the indie filmmaker on a budget. But the truth is, if this is supposed to be on someone’s shoulder for days at a time, I believe whoever is shooting with this will be asking the producers for a real size camera crew or a different solution by end of first week on a production. If you plan to keep the camera on a dolly or tripod, then that’s ideal. But it is not ideal for one or 2 people. I would rather have an Epic or Scarlet and have to deal with the wacky ergonomics than to have to deal with the weight of the URSA.

IT IS NOT IDEAL FOR ONE OR 2 PEOPLE. I WOULD RATHER HAVE AN EPIC OR SCARLET AND HAVE TO DEAL WITH THE WACKY ERGONOMICS

I did look at the footage. If you want my honest opinion, it looks like the 4k camera. And besides people put way too much emphasis on the technical features and color reproduction of cameras and their sensors. Yes they are very important, and it is a great thing if your sensor is global, but that generally doesn’t increase your storytelling skills and craft, the thing that does increase that is experience. That is why you can still watch a movie on a SD VHS and be sucked into the story and admire the movie.(Someday I will write a blog post on the things a DP must do that no one ever talks about, such as being able to lead a team and be personable)
I think Blackmagic was close in making a 4k camera that was affordable and has good mounting options for accessories. But somehow they missed the fact that indie budget movies are very often limited in crew. If you are shooting s run and gun documentary with the URSA and a zoom lens, good luck on the running part!
That is my two cents and an opinion or two… 😉

Fortunately, Southeast Asia is now moving past COVID-19. In order to maintain a safe work environment, Wind Up Films has instituted the following safety measures:
All film sets, equipment, and shooting materials must be sanitized thoroughly before and after any film shoot.
All personnel will have to wear protective masks and gloves for the entire duration of the shoot.
All crew and cast members on-set will have to perform temperature checks.
All crew on-set will have to always keep a physical distance of 2 meters from each other.
All food & craft service on-set will be single use items only.
All film shoots will adhere to all specific government rules and restrictions placed in each respective country.

We believe that the following guidelines will help to ensure that everyone remains happy and healthy on-set.
Stay Safe!